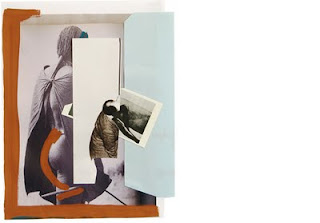 Interested in processes and creation of order in nature and the relationship they have with art, Julia Mariscal, distributes in their scenography elements and materials. Her work is a process that deconstructs the narrative of the aesthetic of her own era and time. From the need to create the story of the world and its genesis, arises the idea about the metamorphosis of the technique, which in this case, portrays the transformation of the black box as the origin of photography, as the end of the perspective pictorial method. In her personal narrative, fragmented and procesual, the development of the subject is given through the use of various media (photo, video, posters) distributed along the exhibition showroom. Creation and magic, lecture and interpretation are the constants of a ritual where the mythological symbolism inherent in the narrative form of literature expresses art as the rational order and the expression of the world. Evoking a process based on beauty, illusion and the original sounds. His work has something of the primitive symbolism, such as Gauguin and Picasso. It also finds in the essence of the form a potential linguistic, the language of the form. In the plane and in the geometry, the form as structure becomes a revealing element, the mystery of transformation. A cosmogony of elements that the work in its disposition in space, revealing the order of creation. In the exhibition, Julia Mariscal works the form of the plateau as one and all, as the representation of the materialization of light and form. Linking the deconstruction of image and sound with time and space. The plateau is the formalization of light in the order, responding to the formal speech and through the perception and the theory of vision, suggests the creation of the image and also its interpretation as the world's information. Hence the duality real/fiction, image/object and the function of art as a fiction translating the reality through the metaphor of space, the world as a place and image as perception. Julia Mariscal works as an artist with sculpture, installation, performance, drawing, photography and video. His work pursues the movement as order and the process. Also discover the materiality as form and meaning, with its own language that reveals the essence and origin. Interested in the fragmentation, distortion, transparency and movement, his work discovers a symbolic and essential primitivism, where form and matter are language for the creation and art. JULIA MARISCAL HORIZONTAL PLEAT 4–31 December 2009 Private View Thursday 3 December 6–9 PM Oblong Gallery presents the first solo show of Julia Mariscal in London. Julia Mariscal was born in Barcelona in 1981. This show will be her first solo exhibition in the UK. Recent solo of Mariscal’s work include ‘To chew missing part or Temporal modes’, Grand Palais, Bern (2008). Recent group exhibitions include ‘Oblong Represents, Oblong Gallery, London (2009); ‘Marking/Erasing’, Viewfinder Photography Gallery, London (2008); ‘Winter Light’,Ovada Gallery, Oxford (2008). Julia Mariscal is part a collaborative project with the artist Rita Evans, they perform ‘The Objectifiers’. Recently performed at The Magic, 176, (2009); ‘Late Night Radio’, Tate Britain (2009). A catalogue will be published to coincide with this exhibition. GALLERY HOURS Wed–Fri 10am–6pm, Sat–Sun 11am–6pm Further Press Information, please contact the gallery on +44 (0)207 354 8330 or write to mail@oblonggallery.com www.juliamariscal.com www.oblonggallery.com